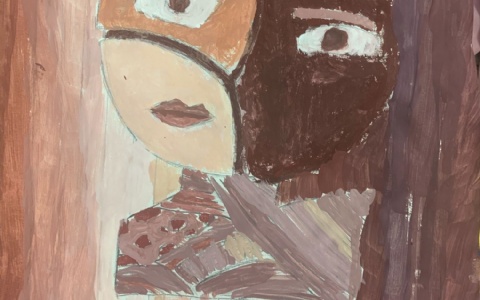 Over the past term in Year 5 and 6, we have been developing our understanding of racism and discussing how we can be part of the movement for change. In Art, we created surrealist portraits and used skin tones to celebrate our diversity rather than the traditional bright colours of Picasso our artist inspiration.

Alongside this, we challenged our children to write speeches with the majority of the year group focusing on how to encourage others to protect our planet through our use of plastic; however, our Head Boy Tomasz, took on the challenge of writing a unity speech which we would like to share with you. He spent a lot of time researching, reading speeches by people like Martin Luther King Jr, participating in conversations with adults before writing and then editing his speech. His writing has been entered in a nationwide competition called Show Racism the Red Card. We think the speech is amazing so hope they do too.

I dedicate this speech to those who have faced injustice, who have faced adversity, who have been judged for more than their character. I address you on a disease which has been infecting the minds and opinions of a minority for too long. And although this problem has been around since the dawn of time since man realised we were different, we have only made steps in our society to make changes: we have not yet reached our ultimate destination.

Unconscious bias is still prevalent and influences our lives, particularly through the media, for example with the current controversy surrounding Meghan Markle.
Meghan speaks out or lives her life and the media portrays it as if she’s responsible for every problem in the world, for example, when Meghan ate avocados in pregnancy and was deemed by the Daily Mail to be responsible for water shortages and child abuse. In comparison, a week later Kate Middleton (Duchess of Cambridge) does the same and is praised by the media. Is it me, or does this not make any sense at all?
Another example is the rise in Anti-Asian hate which is spreading across the USA in particular, seeing a rise in rallies crying out for change. To quote from one of my favourite books, Wonder, “When you can be anything in the world, why can’t we all just be kind?”
Even here in the UK, racism, and ignorance is rife with large shows such as Britain’s Got Talent and Good Morning Britain being criticised over their broadcasting. In 2020, ‘Diversity’ received over 25,000 complaints to Ofcom after their dance routine celebrating BLM, which showed a police officer kneeling on Ashley Banjo’s neck, went live on air. From this performance, the dancers have received death threats to their families; however, now in 2021 it is up for a BAFTA. Why in 2021 are people complaining about freedom of expression. It is our right to speak freely yet our responsibility to show respect.

The solution, to me, it seems is simple: treat each other as you wish to be treated. Yet racism is usually deep-rooted, having been passed down through generations. However, there are things we can do to move forward: educate our children in the way of respect and listening to others opinions; speak out and up against those who promote hate and, finally, understand that the media has their own agenda to which we must hear and see with our ears and eyes wide open.
Consider racism as a conveyor belt, those who stand still yet are moved by the belt are not helping the problem, we must run towards the issue, run towards the solution, run to support our brothers and sisters, or remain part of the problem.

It is time to rise from the pit of blindness and realise that we are all humans and, as humans, we all bleed red. 58 years ago, Martin Luther King Jr. stood before the world and said: ‘I have a dream that one day my four children will not be judged by the colour of their skin but by the content of their character’. Even though we have made strides towards this, we have a long way to go.

Last year, George Floyd was murdered by a white policeman, who lent his weight on his neck by his knee, and what did the bystanders do? Film! Watch! They did not act, they did not run against the racist actions. This is what needs to change. We need not be bystanders to injustice but be activists for the lives we wish for the future of our planet.  What I am saying is that we need to stand against the problem together, today, not wait for it to be solved. So I say EQUALITY FOR ALL!!! Act now, don’t let another 58 years pass with only part of the journey achieved.

Thank you for your time.'

By Tomasz in 6C